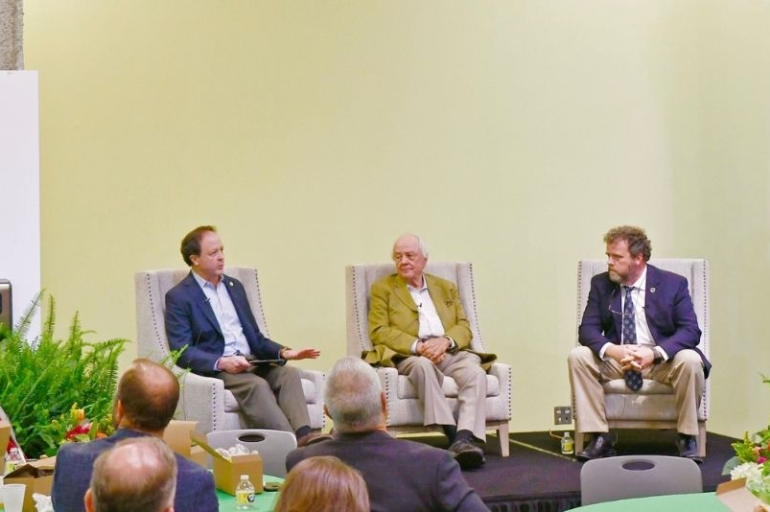 The layout, to be called Otter Creek Golf Park, will be built on the site of the former LeFleur’s Bluff State Park Golf Course, a nine-hole par 36 that closed in autumn 2019. The Otter Creek project is part of a larger master plan at LeFleur’s Bluff Complex, the campus shared between the Mississippi Department of Wildlife, Fisheries and Parks; the Museum of Natural Science; and the Mississippi Children’s Museum.

“When Bobby and I first met about seven years ago, he mentioned to me that only two states did not have a Robert Trent Jones course, and one was Mississippi,” said Crace, who lives and works in the state. “When the project began to gather steam and it was clear that it would protect 100+ acres of urban green space and be the permanent home for First Tee of Central Mississippi, I decided to reach out and ask if he’d like to collaborate. To his credit, he was happy to pitch in to help the First Tee and preserve this critical park space in Mississippi’s capital city.

“Because of the way the project has progressed to this point, I had already completed the routing prior to reaching out to Bobby. He has seen the property in person, and we recently rode over each hole and loves the land and the layout. I am sure we will tweak things as we move forward as happens when two architects collaborate.

“Otter Creek Golf Park – so named because I wanted to denote fun and that this isn’t just another course – will be the connector between the Mississippi Children’s Museum, the Natural Science Museum, the Mississippi Sports Hall of Fame Museum, and the Mississippi Agriculture and Forestry Museum. It will be the hub of the entire master plan with walking/biking trails, pickleball courts, an outdoor amphitheatre, botanical gardens, and so much more.”

Crace was first contacted about designing a pitch-and-putt course in mid-2021 and was asked to attend a meeting at the Mississippi Children’s Museum. At the meeting, Crace realised the potential of the property with the scope growing from an initial pitch-and-putt layout to a 10-hole short course along with a new 18-hole family putting course and a state-of-the-art driving range.

“Ten holes allow us to fully realise the potential of the land we have access to and minimise the walks between the course and new clubhouse,” said Crace. “I jokingly said you could use the first hole as a warmup or the tenth hole to settle a tie, but in reality, a good portion of recreational golf is more about time than nine or 18 holes as we’ve seen with the influx of new short courses around the world in recent years.”

The old course, which was built on rolling land between Pearl River and downtown Jackson, closed because of a dwindling number of rounds being played and with expenses outweighing income. The driving range remains, but Crace says it is too low and stays wet after rain events. “We will fix that problem, expand the tee, add target greens, new lights, and new netting all the way around,” he said. “The range will be connected to the back veranda of the new clubhouse via an 18-hole Himalayas-style family putting course and a separate practice putting green in front of the clubhouse.”

The entire Otter Creek facility will be lit for night-time play.

“Beyond preserving urban green space and being the home of the First Tee, it will help to grow the game by providing access to golf in a metropolitan area in a safe and fun facility, but also attract better players who can play a round of golf in an hour with only four or five clubs,” said Crace. “Maybe a date night? Maybe just a chance to spend an hour at lunch walking and playing golf. The possibilities are endless, and it will be the central hub of the new LeFleur’s Bluff Museum and Educational District.”

Robert Trent Jones Jr said: “I’m thrilled for many reasons to be part of the team creating Otter Creek Golf Park. Not only will it be the centrepiece of a master plan that preserves urban green space in Mississippi’s biggest city, but it also creates a permanent home for the First Tee of Jackson, introducing golf to a new generation. The country – and the world – needs more projects like this.”

Crace hopes the project will be out to bid later this year with earthworks to start as soon as possible with an opening date targeted for late 2023 or 2024.

There a few things that I will never forget from my first visit to Sugarloaf Golf Club in Maine.

Welcome to the ‘golf park’ era

The LeFleur’s Bluff Education and Tourism Complex in Jackson, Mississippi, announced major plans for a new golf facility in the Magnolia State’s capital city that will help to preserve nearly 150 acres of urban green space and create a permanent home for First Tee of Central Mississippi.