Robert Trent Jones, Sr. did not invent golf course architecture, it only seems that way. In a career that spanned nearly 70 years, Jones built or rebuilt some 400 courses in 45 states and 35 countries worldwide, with more than three dozen having played host to national or international championships.

Jones made an art form of heroic architecture, institutionalizing the risk-reward shot in modern courses. With his oft-quoted philosophy to make every hole a hard par but an easy bogey, he also had a profound impact on tournament golf.

Jones built or remodeled some of the most muscular courses the pros have ever faced, including Firestone, Hazeltine, Spyglass Hill, Baltusrol, and Oak Hill. In his early years Jones’ designs often engendered criticism as too severe, and the complaints reached a crescendo when he remodeled Oakland Hills for the 1951 U.S. Open. When a victorious Ben Hogan boasted of having brought that “monster to its knees,” and Herbert Warren Wind followed with a laudatory article in the New Yorker, Jones was introduced to a mass audience and the cult of the golf architect was born. 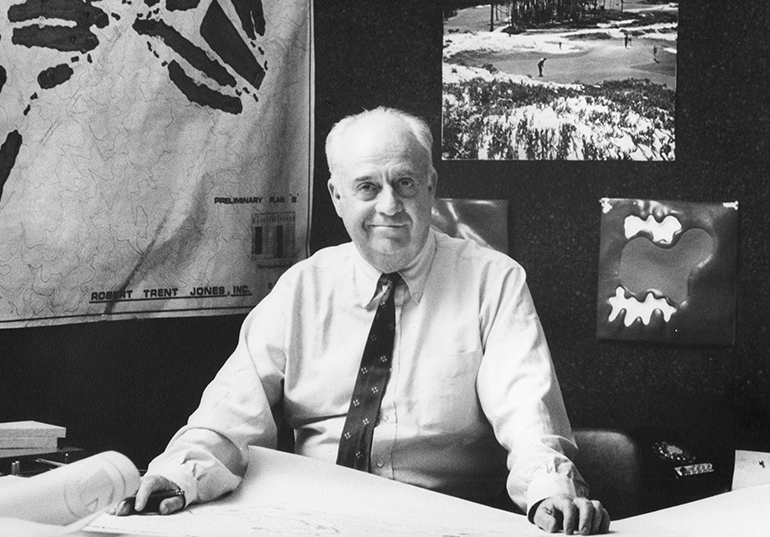 Born in Ince-in-Makerfield, England, at age 5 Jones moved with his parents to East Rochester, New York. He was introduced to golf as a caddie at the Rochester Country Club; later, he became the first golf professional at Sodus Bay Heights Golf Club in NY. Jones developed an original course of study at Cornell University that provided him with the ideal background to launch a career in golf course architecture.

After school, he enjoyed a brief partnership with revered Canadian golf course architect Stanley Thompson before striking out on his own in the late 1930s, designing and building local golf courses in America, many  built using labor provided by the Works Progress Administration. Shortly after World War II, Jones got his first big assignment designing Peachtree Golf Club in Atlanta in collaboration with golf legend Bobby Jones. Despite the similarity of their names, the two men were not related. In fact, Robert began using the middle name “Trent” shortly afterward to avoid confusion.

Jones’ courses are noted for their artistic landscaping, innovative use of bunkers, liberal use of water hazards, and deft placement of greens and hazards that encourage a high level of strategy. He believed that golf should be a no-risk, no-reward sport and his designs encouraged daring play.

Following a period of failing health, he retired to his home in Fort Lauderdale, Florida. He died there peacefully just a few days short of his 94th birthday. Jones received the 1987 Old Tom Morris Award from the Golf Course Superintendents Association of America, GCSAA’s highest honor and was inducted into the World Golf Hall of Fame that same year.

RTJ Sr. and the Making of Modern Golf

Where to find this

Inducted into the World Golf Hall of Fame, 1989