The course was originally designed by RTJ II and opened in 2006. It closed in 2015 and was bought by the neighbouring Tamarack Resort in 2016.

The scope of work has included a slight rerouting to allow for residential development and repositioning many bunkers to better challenge the big hitters, while making the layout more playable for shorter hitters. Tees have also been reshaped and more short grass has been introduced as a defence.

Many of the changes made will improve playability. For instance, the number and length of forced carries has been reduced, while fairways have also been widened. A par-three nineteenth ‘Gambler’s Hole’ has been added, between the first and eighteenth holes.

With the course having expansive views to the nearby mountains, the RTJ II team approached the project with a ‘listen to the land’ philosophy, making full use of the property’s The original layout, pictured shortly after it opened in 2006 natural contours, wetlands and meadowlands. Careful pruning and removal of some vegetation has been undertaken.

“We explored opportunities to provide some ‘plastic surgery’ to many of the golf holes while providing room along the perimeter for resort and residential development,” said Bruce Charlton, president of RTJ II. “This is definitely what I consider a reinvigoration of the Osprey Meadows course, mostly an allocation of more space to the golf course to make it more fun.”

Contractor Landscapes Unlimited has started construction work on the project, which aims to improve playability. The project will also see the creation of a new par-three nineteenth hole, dubbed ‘the Gambler’s hole’. 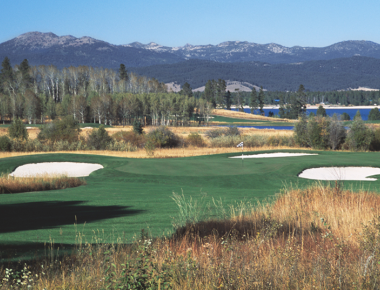 Nestled among high meadows and ponderosa pine forests close to Idaho’s vast Frank Church Wilderness, the Osprey Meadows at Tamarack Resort is an integral component of the first all-season resort permitted in the U.S. in over two decades. True to Robert Trent Jones II’s record of environmentally responsible design, we preserved much of the land in its natural condition, so the course looked mature right from the start.

Oh, Chambers Bay, how I love thee, let me count the ways…

Robert Trent Jones Jr. can tell straight away whether a piece of land can be transformed into a beautiful golf course.