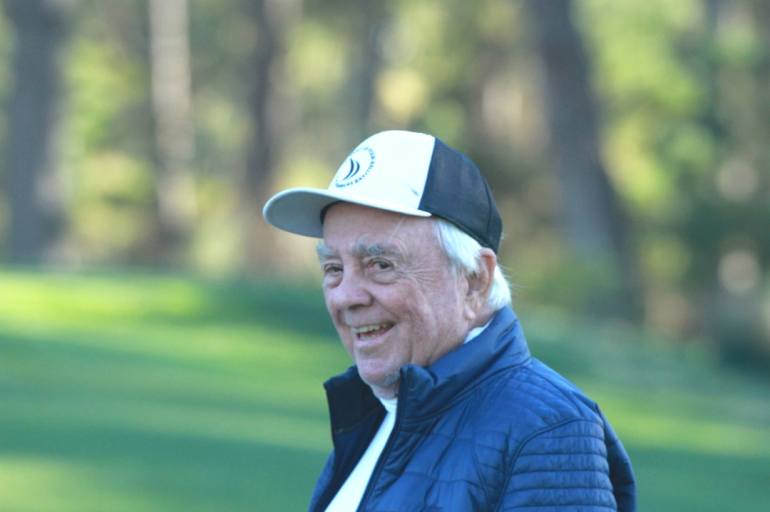 Architect Robert Trent Jones, Jr., who originally designed Poppy Hills when it first opened in 1986, was there to review progress on a current refinements project.

The project primarily involves modifying the greens on the par-3 second and par-4 seventh holes and the installation of a new practice green. Some modest teeing ground enhancements are also being implemented.

The course is owned and operated by the Northern California Golf Association, whose headquarters are located at Poppy Hills.

Jones, 82, has designed or remodeled more than 270 golf courses during his career, including the Links at Spanish Bay.

The green on the par-3 second hole has, as Jones described it, always been a “nemesis” due to its location. The green sits on the other side of a ravine, which players must carry with their tee shot.

“The original idea for No. 2 was to have two separate greens,” Jones said. “In the 2014 renovation, it went back to being one green, but it still feels like two greens — kind of a bowl on the right and a plateau on the left behind the greenside bunker which requires a very strong shot over the bunker and not turning the ball over. Because if you turn it over, you’re on the third tee.”

According to Jones, the new green on No. 2 will be softened.

At No. 7, the large green (6,000 square feet) the back-flagstick position is currently difficult to access for the average player. Jones said that green will also see a reduction in contours to ease transition.

“We want to make it so that if you’re on the green, you can transition from one part to another part without trembling,” Jones said.

Jones said that on No. 12 the second bunker on the left side of the fairway may be modified to provide a more generous landing area on that side of the fairway. The new practice green will also feature fewer contours, resulting in more hole locations and enabling more players to use the green for events including NCGA championships.

Jones overall said the course remains “perfect” in his eyes.

“I’m very happy with the course. I think it’s one of our great works,” he said.

When opened in 1986, Poppy Hills became the first course to be owned and operated by an allied golf association. From 1991 through 2009, the course was one of the three venues used during the annual AT&T Pebble Beach Pro-Am. It also previously was a host venue for the PGA Tour Champions PURE Insurance Championship Impacting The First Tee and in 2018 hosted the U.S. Girls’ Junior Championship.

The Poppy Hills refinement project is expected to be completed by late January 2022. During the project, the course remains open and playable in a modified 18-hole form. However, temporary greens are in use for holes No. 2 and No. 7, with hole No. 3 playing shorter during the bunker improvement work.

The third and final segment of our 2020 Ultimate Golf Trip to Pebble Beach found us playing Poppy Hills Golf Course.  Poppy Hills is not associated with Pebble Beach Golf Resort, but they do share the same zip code.

Tucked into the Del Monte Forest on California’s Monterey Peninsula, Poppy Hills is well known to fans of the AT&T Pebble Beach National Pro-Am as one of the toughest tests of golf faced by PGA TOUR players. It’s also a rare location where the public can test itself on the same course it has seen the pros play on television. Poppy Hills was built as the home course for the Northern California Golf Association and was the first golf course in the U.S. to be owned and operated by an amateur golf association.

As it celebrates 50 years on the PGA Tour, this course only trails a few for longevity (like Augusta National and Pebble Beach)

Charlie Sifford made a lot of history on the PGA Tour, but Sifford also made at least some history in the desert PGA Tour event, The American Express.

Inside SentryWorld: Wisconsin’s OTHER great public course you should know about

OK, maybe you know about the flower hole. Does that mean you know SentryWorld, too?

Baja California’s East Cape, along the Sea of Cortez, is rural and rugged yet boasts some of the area’s most luxurious accommodations.