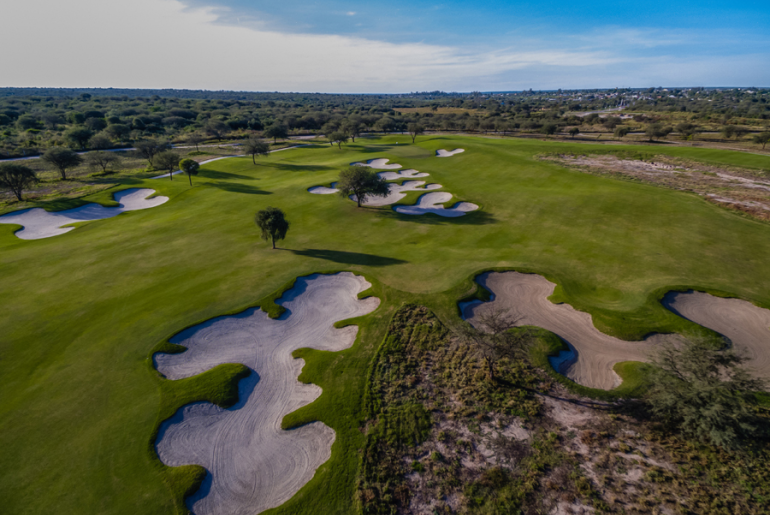 Palo Alto, California— Recently, when President Mauricio Macri of Argentina met with United States President Donald J. Trump, it should not be surprising that the conversation turned to golf. Both share the same passion for the game and Trump Golf owns numerous world-class courses.

When Termas Rio Hondo International Golf Club opens next spring in Termas Rio Hondo, in the region of Santiago del Estero, Argentina, it no doubt will draw comparisons to another world-class Robert Trent Jones II golf course design in the U.S.: Chambers Bay near Tacoma, Washington, host of the 2015 U.S. Open Championship.

Termas Rio Hondo International Golf Club is to play a key role in the expansion of the Santiago del Estero Province as tourist destination, joining this region of Argentina’s new Formula 1 racetrack, new airport, and national museum of art and history.

“We designed a golf course that will attract people to the region to stay and play for several days,” said Bruce Charlton, President and Chief Design Officer for RTJ II Golf Course Architects. “But it was also important that we give them a golf course that someday is going to host a world championship level golf tournament.”

RTJ II golf courses have hosted tournaments on every major golf tour in the world – most recently at Chambers Bay and the 2016 U.S. Women’s Open Championship at CordeValle in California. Their designs have also hosted special events such as the U.S. Amateur, World Cup of Golf, The Skins Game, The Grand Slam, NCAA Championships, and many others.

Weaving along a large wetland/marsh habitat while negotiating nine natural ravines and bordered by the Rio Dolce (“Sweet River”), the Rio Hondo golf course features an abundance of sun-loving vegetation reminiscent of Hawaii and Arizona. Fairways are to be wide and engaging, giving golfers room to play in the changing winds.

Sandy areas along the perimeter of the holes will be in play and each is designed with the flexibility to be set up several ways – both traits of Chambers Bay, highly regarded as one of the most innovative golf course designs of the past decade.

“Learning Spanish from an Argentine professor at Yale University, it now is a great delight to me to employ the long history and diverse cultural heritage of Argentina into the large, varied and wide open layout of our golf course,” said Robert Trent Jones Jr., Chairman and Master Architect of RTJ II. “Incorporating the culture of Argentina into the golf course, as well as the native flora and fauna of the region, results in a golf experience unique to this region of South America. We have integrated the character of Santiago del Estero into our design, with a golf course that is captivating every time.”

Multiple holes at Termas Rio Hondo International may be played as a par 3 or par 4, with others as optional par 4 or par 5, allowing the golf course to be set up differently daily. All players enjoying this world-class golf facility will discover new challenges and interesting options each time they play Rio Hondo

That variety in playability is similar to RTJ II’s recent dramatic work at Hogs Head Golf Club, the firm’s first original golf course design in Ireland. Hogs Head, which lies adjacent to the scenic shoreline cliffs south of Waterville, Ireland, will be unveiled in August.

RTJ II’s 2014 renovation of the popular Poppy Hills Golf Course, in Pebble Beach, Calif., garnered a collection of “best” awards from GOLF Magazine, Golf Digest, Golfweek, and other entities. And four RTJ II courses are in the Top 10 of the “Top 100 Nordic Golf Courses” compiled by Golf Digest/Sweden magazine.