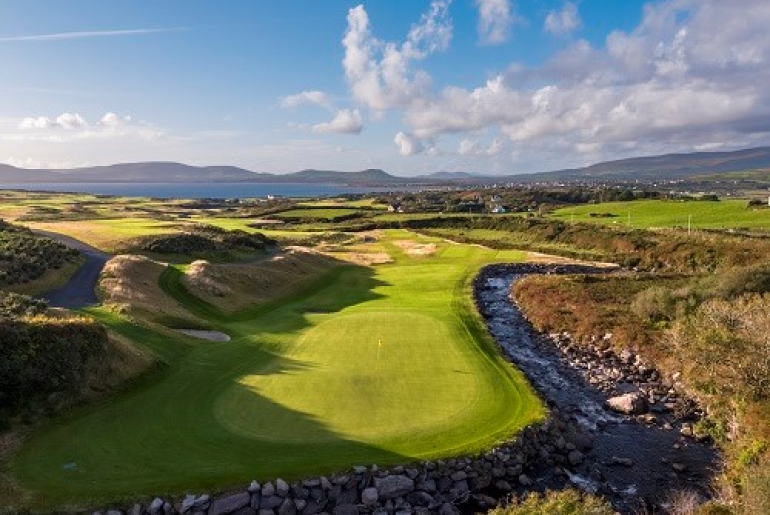 Palo Alto, California— Whether on a stretch of Irish peninsula overlooking the Atlantic, sand dunes along the South China Sea, or enhancing an international sporting destination in Argentina, the global footprint of Robert Trent Jones II (RTJ II) Golf Course Architects is on the threshold of milestone achievements in 2018.

The new year will see the first original golf designs by Robert Trent Jones, Jr. either opening or in construction, in Ireland, Argentina, Vietnam, and Ecuador as RTJ II’s portfolio now extends to more than 40 countries on six continents.

“Despite our global reach, we’re a small, hands-on company,” said Chairman and Master Architect Robert Trent Jones, Jr. “We select a unique collection of design projects each year. The consistent quality of our designs has secured our reputation in countless settings around the globe.”

Hogs Head Golf Club in Waterville, Ireland, will open formally in the spring, an RTJ II original design with all the playing characteristics of fabled links designs. A headlands course surrounded by farmland, Hogs Head is a continuous 18-hole sequence with nine holes routed along the edge of dramatic, 100-foot coastal bluffs, and an inland stretch that navigates the ever-present Finglas River.

Termas Rio Hondo International Golf Club in Argentina is already playing a key role in the expansion of the Santiago del Estero Province as a tourist destination. The region is also home to the country’s new Formula 1 racetrack and national museum of art and history.

RTJ II’s first course in Vietnam is Hoiana Golf Club, a breathtaking dunes landscape along the South China Sea that features two beachfront holes steps from the crashing surf. Scheduled for a spring 2019 opening, the design incorporates a “short course” within the “regulation course” to provide a variety of experiences on a course that feels like a links experience in the tropics. Situated nearby is the ancient village of Hoi An, a UNESCO World Heritage site.

Also underway in South America are two other RTJ II projects: Guayaquil Golf Club in Ecuador and Serena del Mar in Colombia. Costa Palmas Golf Club in Los Cabos, Mexico, also is under construction, incorporates three distinct dunesland, harbor and canyon golf experiences. RTJ II has partnered with Four Seasons Costa Palmas on this pioneering project on the remote East Cape of Baja and is set to open in spring 2019.

Back home, RTJ II is looking forward to the completion of Oxbow Country Club in North Dakota, as well as unveiling the restoration of the timeless architectural design of North Ridge Country Club near the California capital of Sacramento.

“We choose each project carefully,” says Bruce Charlton, RTJ II President and Chief Design Officer, “to ensure that we can deliver fun and creative golf challenges in world-class environments.”