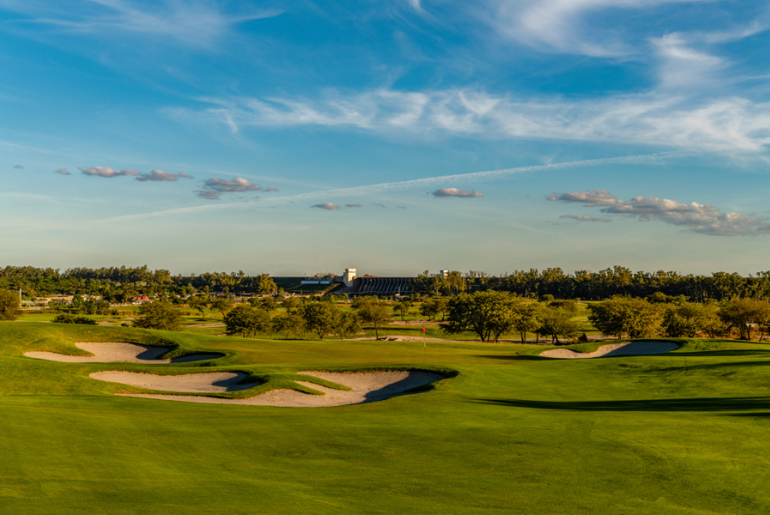 “We designed a golf course that will attract people to the region who will want to stay and play for several days,” said Jones, Chairman and Master Architect for RTJ II, which has built more than 280 courses in 40 countries.

Termas de Rio Hondo Golf Club is projected to play a key role in the growth of tourism for the province, located in northern Argentina, joining a world-class Formula 1 and Grand Prix motorcycle racetrack, new airport, national museum of art and history and historical habitat preserve. Argentina boasts the greatest number of golfers and has the most golf courses of South American countries.

“We integrated the rural character of Santiago del Estero into our design with a golf course that will captivate the golfer’s eye and imagination every time he or she plays there,” Jones said.

Weaving along a large wetland/marsh habitat while negotiating natural ravines and bordered by the Rio Dulce (“Sweet River”), the Termas de Rio Hondo course features an abundance of sun-loving vegetation reminiscent of arid areas of Nevada and Spain. Fairways are wide and engaging, giving golfers room to play in the changing winds. The golf course is planted in Paspalum grass throughout, selected for its ability to thrive on the site’s salty soil base and compatible with   northern Argentina’s summer weather. The local climate invites year-round play.

"The large, original, varied, and wide-open layout allows us to incorporate the culture of Argentina into the golf course, as well as the flora and fauna of the region,” Jones said. “The result is a golf experience reminiscent of the great Pampas of Argentina.”

The design at Termas de Rio Hondo Golf Club takes “flexibility” to a new dimension in championship golf course setup. Two holes – No. 6 and No. 9 – can be played either as a par 4 or par 5, while No. 15 provides the option to be a par 3 or par 4, allowing the golf course to be set up differently every day. The course can play from 5,137 to 7,510 yards, and as a par 72 or 73. The “ribbon tees” are merely extensions of the fairway and make the course playable for any and all golfers.

“A key component to playing Termas de Rio Hondo will be to stay below the wind and use your imagination,” said Bruce Charlton, President and Chief Design Officer for RTJ II. “The greens do not always require an aerial shot, so playing the ground game is essential. The course requires a different style of play.”

“With the spacious design of this golf course,” Jones added, “we have created a premier venue deserving of a championship-level golf tournament.”

Tournaments on every major world tour have been contested on RTJ II golf courses. The company’s designs have also hosted special events such as the World Cup of Golf, The Skins Game, The Grand Slam, The Ryder Cup, NCAA Championships, and many USGA events – most recently the 2015 U.S. Open Championship at Chambers Bay in Tacoma, Washington and the 2016 U.S. Women’s Open Championship at CordeValle in California. This summer, the U.S. Girls’ Junior Championship will be played at RTJ II’s Poppy Hills Golf Course in Pebble Beach, California, and the following year’s at SentryWorld, Wisconsin.